The city of Reading and Trinity Lutheran Church have grown side by side through 260 years of their history. When the Towne of Reading was laid out in 1748, the Rev. Tobias Wagner, pastor of the large Tulpehocken congregation and officiant at the marriage of Henry Melchior Muhlenberg to Ann Marie Weiser, began getting Lutherans together for services at Conrad Weiser’s Trading Post. 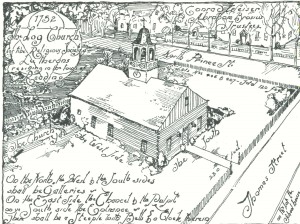 By 1751 Trinity was formally organized. A land grant was received from the sons of William Penn for lots at the corner of Prince and Thomas Streets (now Washington and Sixth Streets!), and in 1752 log church was built, surmounted by a modest bell tower and clock. The congregation petitioned for admittance into the Ministerium of Pennsylvania, and Dr. H.M. Muhlenberg, its president, officiated and preached the first sermon here on October 15, 1752.

At least ten pastors served in that log church. In the relatively prosperous times following the American Revolution, an elegant brick two-storey church was erected and dedicated on Trinity Sunday, 1794. There was a bell tower but no steeple. In 1833, the first steeple was complete; reaching to 202 feet, and reported to be the tallest structure in Pennsylvania at the time. After sixty years it was deemed unsafe and completely rebuilt. It survived a lightning strike in 1925 only to be felled by a tornado in 1933. In 1963 the steeple was again re-built (on a steel frame!), replicating the original design. With the addition of spotlights, it remains a city landmark both day and night.

Passersby are intrigued by the old grave markers in the Churchyard, the original cemetery. Here lies Dr. Bodo Otto, a senior surgeon in George Washington’s army, who, with his sons, used Trinity as a hospital after the Battle of Brandywine in 1777.

Over the years, Trinity became known as ‘mother church,’ giving birth to a number of Lutheran congregations in Reading. St. Matthew’s and St. James’ were started as English speaking congregations, while St. John’s broke away in 1860 to continue holding services in German. St. Luke’s, Grace, Faith, Hope, Peace, St. Mark’s, and Holy Spirit in the city, and Bethany in West Reading, are all descendents of Trinity. 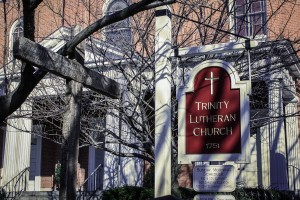 Belying its age, Trinity has been involved in a number of innovative and creative ministries over the years. For nearly a century we have served our Trinity Deaf congregation. Trinity helped to establish the city-wide food pantry system and provided leadership to found Opportunity House, a homeless shelter, child care and learning center. For nearly four decades we have broadcast worship and special programming via cable TV, more recently sharing the gospel via our video website. In the last few years we have been particularly devoted to strengthening education in the city, ‘adopting’ 10th & Penn Elementary School and partnering with the Reading/Berks Literacy Council to provide ESL, GED and literacy support.

The Rev. Dr. Gunnar Knudsen, historian and Trinity Pastor from 1943-1967, wrote in his congregational history, “Two Living Centuries”: “We are the possessors of a living foundation on which to build the coming years. We must pray in thanksgiving for the heritage that is ours, but only in the sense that we can continue to the point where the final phase of the Creation story can be pronounced as a benediction on our work, “and God saw, and it was good.” Celebrating the 260th anniversary, Trinity has published an updated history, written by member Brian Trupp. Filled with wonderful photographs and stories, it is a testimony to the Spirit’s continuing work among and through us. If you would like to purchase a copy please email our Parish Administrator, Donna Taglieri, using our contact form below, or call the church office at 610-374-4861 during normal business hours.

Jesus says, “It is your Father’s good pleasure to give you the kingdom.” It is God’s promise from the beginning—to Abraham, to the early church, and to the “little flock” of which we are a part in today’s assembly. Faith, God’s baptismal gift, trusts the promises of God. Have no fear.
Follow along with our worship bulletin: trinityreading.org/wp-content/uploads/2022/08/8.7.22-Lect-19-Pent-9.pdf
... See MoreSee Less

Today’s texts offer instruction and encouragement for all who are occasionally overwhelmed by the “unhappy business” of life. Jesus urges us to take care and be on guard against all kinds of greed. We who have died with Christ in holy baptism have also been raised with him and are encouraged to elevate our thinking, seeking the “things that are above.” To that end we seek the sustenance of the Lord’s supper and the encouragement of God’s word.
Follow along with our worship bulletin: trinityreading.org/wp-content/uploads/2022/07/7.31.22-Lect-18-Pent-8.pdf ... See MoreSee Less

Husband and wife duo Anna and Erik Meyer presented this marvelous recital featuring many new compositions for flute and organ. Enjoy the reprise of their program, recorded in 2021. ... See MoreSee Less

Last morning & worship in the Chapel of the Resurrection. It’s be an incredible month. I can’t wait to share my stories with you. ... See MoreSee Less

Persistence in prayer is encouraged by Jesus and wins the attention of God when Abraham intercedes for Sodom. The life of the baptized—to be rooted and built up in Christ Jesus—is to be nurtured with prayer. God hears and answers prayer and so strengthens God’s own. “When I called, you answered me; you increased my strength within me.”
Follow along with our worship bulletin: trinityreading.org/wp-content/uploads/2022/07/7.24.22-Lect-17-Pent-7.pdf ... See MoreSee Less

Hard to believe that this is my last full day at LSM. Orchestra concert and Evening Prayer tonight. Festival worship tomorrow at 9 am central time. I’m honored to be playing as part of the service. ... See MoreSee Less

I posted a video of last night's amazing hymn festival. I was honored to read a scripture passage and a reflection by Susan Palo Cherwien. You can hear those around minute 57. This morning I led the LSM and ALCM communities in a hymn during Morning Prayer. My time here has be exhilarating and exhausting. I am so grateful to my Trinity family for the opportunity to be here and for your prayers during my time away. With love & gratitude, Karen ... See MoreSee Less

Thank you for posting your journey, Karen. I enjoyed following it!

I was able to watch it all. Lovely worship

How many hours I spent in that chapel... So wonderful to be able to worship with you! (and did you make sure everyone knows it's pronounced "Redding" NOT "Reeding" Railroad on the Monopoly board?)