“Our new organ affirms Trinity’s commitment to provide inspiring worship and glorious music for many generations to come!”

In 1771, the installation of the Tannenberg pipe organ in Trinity’s log church began a tradition of excellence and high expectation for the worship of God at Sixth and Washington Streets. Those Lutheran pioneers understood the power of music to uplift and inspire, to comfort and make whole.
Two successive instruments, built in 1874 and 1916, provided support to our growing and changing congregation. That 1916 Austin Organ served us through July 2012, leading countless services, offering glorious recitals, and being featured in TV broadcasts literally around the world. For a number of years, our venerable Austin had been in a state of serious decline. Major components, such as the thousands of electromagnetic ‘motors’ and their leather components were failing, with some parts no longer made and others very expensive to recondition. 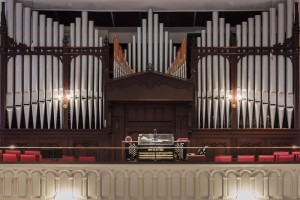 After several years of study, interviews and visits to various installations, our Organ Study Committee recommended to the congregation that we purchase of a new organ from Patrick Murphy & Associates (Stowe, PA).  The congregation responded generously and enthusiastically to the recommendation. In June 2012 a “Farewell Recital” was held, and in July the Austin was removed. Making weekly visits to the factory, our Media Director, Matthew Mellen, is working to produce a documentary of the organ building as a testimony to the skill and artistry of its creators. Photographs of the organ construction can be found here.

The new instrument, pictured below, is a three-manual, 48-rank organ with 37 stops, housed in a Georgian-style case that reflects a number of the architectural elements of our sanctuary. The complete stop list for our organ can be found here.  The use of slider wind chests allows most of the pipes to be set within the nave space, rather than tucked back in the steeple as in the previous design. About 30% of the new organ pipes are from the 1874 and 1916 instruments. Photographs of the organ installation can be found here. 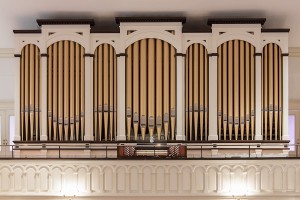 The new instrument was used for the first time in worship on Easter Sunday, March 31, 2013.  Music for the day included “Fanfare” by John Cook, “Toccata” from Symphony No. 5 by Charles-Marie Widor, and a newly commissioned piece  for choir, organ, brass, and  timpani –  “Be Alert, Be Brave, Be Strong (Do All Your Work in Love) by Trinity’s Composer in Residence, David Himes. You can watch and listen to these pieces here.

The Sundays after Epiphany continue to celebrate the revelation of God’s glory to us as it was made known to the magi and to those on Jordan’s banks at Jesus’ baptism—today using wedding imagery. Our God rejoices over God’s people as those being married rejoice over one another. By the power of the Spirit there are gifts galore for everyone. In Christ Jesus the best wine is saved for last. Taste and see.
Follow along with our worship bulletin: trinityreading.org/wp-content/uploads/2022/01/1.16.2022-Epiphany-2.pdf ... See MoreSee Less

Good morning from Eugene, OR!

Due to the winter weather advisory, worship services have been cancelled for Sunday, January 9. Be safe. ... See MoreSee Less

Trinity was delighted to have the AE Meyer Duo, Anna & Erik Meyer, flute and organ, record a program of newly composed music. The first three selections were written by Erik and are included on the couple's debut CD Fantasmagoria. Compositions by Parker Kitterman and Kile Smith round out the program. Magnificently performed, the program highlights three outstanding Philadelphia-area composers/musicians.

As on the first day of creation, in this Christmas season the Word illumines the world, shining forth to bring all things into being. Today we celebrate the incarnate Word, God becoming flesh to live among us in the person of Jesus Christ then and now. Emboldened by the good news of Christ’s birth, along with the shepherds, Mary and Joseph, and all witnesses to the light of Christ, we declare to the world that we have indeed seen and been transformed by the arrival of “the salvation of our God.” O come, let us adore!
Follow along with our worship bulletin: trinityreading.org/wp-content/uploads/2021/12/1.2.2022-Christmas-2.pdf ... See MoreSee Less

On the first Sunday of Christmas we find the boy Samuel and the boy Jesus, both in the temple, both growing in wisdom and stature and in favor with God and humankind. We too have returned to the house of God “to sing psalms, hymns, and spiritual songs to God,” who has gifted us with a savior. As the festival continues, “let the peace of Christ rule in your hearts.” It is Christmas, still.
Follow along with our worship bulletin: trinityreading.org/wp-content/uploads/2021/12/12.26.21-Christmas-1.pdf ... See MoreSee Less

In winter’s deepest night, we welcome the light of the Christ child. Isaiah declares that the light of the long-promised king will illumine the world and bring endless peace and justice. Paul reminds us that the grace of God through Jesus Christ brings salvation to all people. The angels declare that Jesus’ birth is good and joyful news for everyone, including lowly shepherds. Filled with the light that shines in our lives, we go forth to share the light of Christ with the whole world.
Follow along with our worship bulletin: trinityreading.org/wp-content/uploads/2021/12/12.24.21-Christmas-Eve-candlelight-service.pdf ... See MoreSee Less

Getting ready to worship together!!! Blessed Christmas! ... See MoreSee Less

He is fabulous what a beautiful voice love you all

What a beautiful performance and voice ❤